This project is funded by the European Regional Development Fund (EFRE).

The systems which are currently available on the market include a further receiving system which is typically installed (raised) on a roof already covered with roof tiles, which then receives panels (solar power or solar heat). The "disfigurement" and the insufficient use of the roof surface are (in addition to the installation costs of such a "double roofing") the serious disadvantages of this system. The usage of a solar roof tile instead of a "normal" roof tile is a quite obvious solution. However, it requires a very efficient design to be able to mount these solar roof tiles quickly and easily on the existing roof battens with different lath spacing. It also requires a roof system, which guarantees the supply and discharge of the fluid (in case of solar heat) and electricity (in case of solar power - also called photovoltaics). We are developing these solar roof tiles and roof systems and have patented them in different patents. Our solar roof tiles have the same dimensions and the same weight as comparable roof tiles made of clay, but are considerably more stable, more durable, walkable and storm-proof.

As part of the above-mentioned, EFRE-funded research project in cooperation with the University of Applied Sciences Cologne the solar roof tile is being further developed and optimized so that it can be mass-produced and used like a conventional roof tile. The focus is on both the individual solar roof tile and the overall system, i.e. the series connection of several solar roof tiles. The performance of the system is examined in tests in the laboratory and on roof areas. 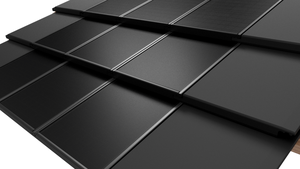 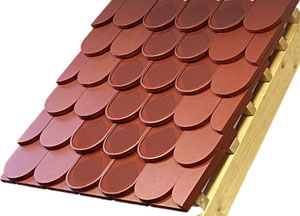 The solar roof tile MH combines photovoltaics (electrical energy production) with solar thermal energy (thermal energy generation) through the formation of an air duct, which arises as a result of the overlap of the individual solar roof tiles. At the same time, this air duct ensures ventilation and thus cooling of the solar cells, which increases the efficiency of power generation and the life of the cells. With a heat pump the heated air can be used for domestic water heating or underfloor heating.

The dimensions and weight of the solar roof tile MH correspond to those of normal roof tiles. It can be laid in a conventional way and replaced quickly and safely. The solar cells are not visible from the outside, which preserves the look of a normal house roof.

The power density reaches up to 170 W/m². Therefore only 60 m² of solar roof tile area is necessary to get a 10 kWp (STC) PV-system. The rest of the roof area is covered with inexpensive complementary roof tiles.

Because of the small module format, even rugged roof areas can be optimally utilized and shading can be compensated significantly better.

The solar roof tile MH can be designed in different designs and colors.

For the production we are looking for additional investors and partners. If you would like to promote this project together with us and lead it to success - then we look forward to hearing from you:

The solar roof tile FH combines photovoltaics with solar thermal energy using a fluid that cools the solar cells and whereby the heating system can be directly supported. 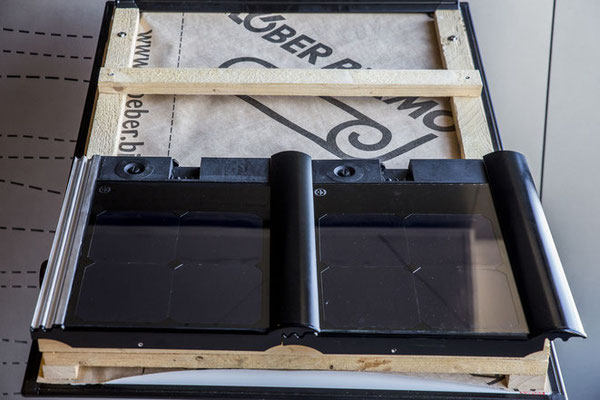 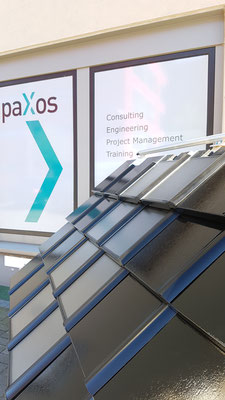 The solar roof tile FH combines photovoltaics with solar thermal energy using a fluid that cools the solar cells and whereby the heating system can be directly supported.

The chain of tiles with "snap-in system". Astonishingly easy and quick to use is the "snap-in system", with which a roof can be covered just as quickly as a roof with normal roof tiles. Due to the length variability, the tiles fit to the normal slat dimensions (the distances of the slats vary by up to 10% depending on the length of the roof and the number of tiles, so that an integer number of tiles can be covered uncut) 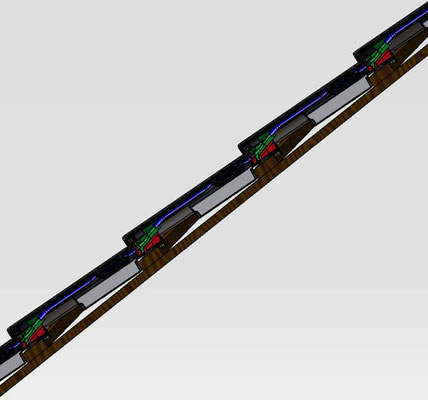 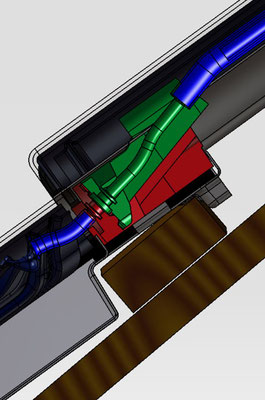 This energy yield in photovoltaics is actually achieved with the paXos solar roof tile FH, while conventional systems degrade in summer from 25 degrees Celsius with about 0.4% per further degree of heating, ie. often bring significantly less yield.

Note 1: As a kind of "hidden performance", the paXos solar roof tile FH offers a much cooler attic in summer, which in turn requires no or significantly less air conditioning power.

Note 2: The performance data for the roof refer to a roof without dormer, skylight, antenna mast or similar.

However, such "yield-reducing" elements are less problematic with the paXos solar roof tile FH than with conventional panels because these elements can be bridged and need not be recessed with the area of an entire panel (or several).

Note 3: If in summer the photovoltaic is cooled to an optimum of 25 degrees Celsius in order to have the maximum yield, it will be cooled with a patented "cooling chimney" - more on that under the cooling chimney tab. But that would also mean that the yield in solar thermal energy would be correspondingly low. This can be remedied / changed by three things.

Which of the three options (sometimes in combination) are used depends on the individual needs and the orientation of the roof surface.

The solar roof tile FH is in the prototype phase and is currently being tested for industrialization together with our partners.