For us, electromobility is the future. Used sustainably, produced in a resource-friendly and resource-saving way, and efficient in operation. We are driving the new age forward with our developments. With creativity, pragmatism and know-how from the automotive sector, we are currently developing vehicle-side solutions for a stable charging infrastructure with charging stations, plugs and cables.

The charging plug Cool-Load Megawatt impresses with its high charging power and stylish appearance. Due to the integrated active cooling, the large contact surfaces and the automatic control of the contact closure, charging powers of over 3000 kW are possible. By scaling the plug diameter, these can even be increased to 12 MW. This means that in the future a vehicle can be charged comfortably and in significantly less time than is currently possible.

Especially in the commercial vehicle sector and for long distances, battery-electric vehicles are currently not profitable for companies. With the Cool-Load Megawatt, this can be changed sustainably.

With the charging plug Cool-Load Megawatt, a large contact area is achieved for energy transfer. Thanks to the integrated liquid cooling, losses in the cables and at the contacts are significantly reduced. As a result, higher currents can flow, enabling faster charging. The multiple stranded individual cables and cores in the charging cable result in a high degree of flexibility that is in no way inferior to classic fuel hoses.

Via an ingenious mechanism, the contact rings of the charging socket are tightened after the charging plug has been inserted without force, thus generating a high contact pressure. The charging process starts automatically after verification.

APPLICATION IN THE MARINE & AVIATION SECTOR

In addition to the vehicle sector, the maritime sector and aviation are also becoming increasingly electrified. The charging plug Cool-Load Megawatt is also the optimum solution for these areas of application, as it meets the increased requirements for contact reliability due to strong waves or storms as well as increased air pollution due to salts or dust. By creating a slight overpressure under the protective tube, but also when coupled to the charging pole and with the socket, the penetration of salty air into the plug connection, for example, is prevented.

For the charging process in the maritime area, the use of our cable bridge is also ideal. Between quay and ship, movements occur in all six degrees of freedom, which can be irregular. With the cable bridge, a safe and at the same time flexible connection between a charging station and a ship is established, which allows relative movements.

In the IDEAL project (Innovative DC Technology for Sustainable Integration of Modern Charging Infrastructure for Electromobility), new types of DC-based charging solutions for electromobility are being researched. The grid connection will no longer be via alternating current, but via direct current, and the feed-in points for the local direct current grid will be distributed at grid interconnection points, such as substations or local grid station

The IDEAL project is a collaborative research project with the following research and project partners:

The project is funded by the German Federal Ministry of Economics and Climate Protection (BMWK). 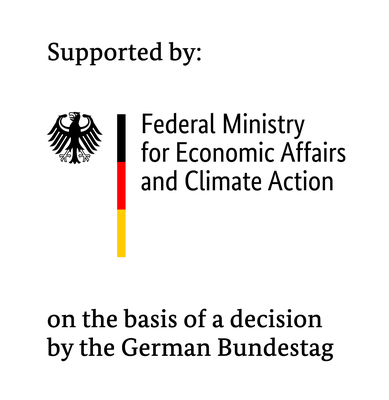 To match the charging plug Cool-Load Megawatt, we are currently developing a charging cable that is actively cooled and enables high charging power. Individual, stranded cables lead to greater flexibility and create the feeling of holding a classic fuel nozzle in your hands.